Here's the first screen capture from the Wi-Spy. There's not much there as it's a picture of the background noise at my house. 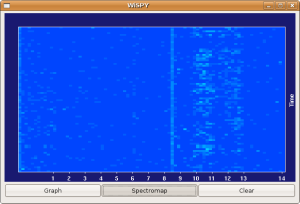 The light noise scattered between 10 and 13 is actually a wireless network belonging to a neighbor, a few house up the street. I have no idea what that narrow band of signal between channel 8 and 9 is. Josh Wright had pointed out a similar band during a recent talk and indicated that it was a wireless camera. Maybe that's the case here too.
Posted by joat at 11:00 AM