I've been playing with Asterisk for awhile now. In hooking it to Icecast and Liquidsoap, I needed to come up with some sort of management system for the conference calls.
Meetme Manager really didn't fit the bill. I liked the available controls but hated that you had to click on something to update the page. This meant either a local GUI or an Ajax-driven web interface.
Luckily, John at Asterikast had played with an Ajax (I think it's Ajax) interface which maintains a connection to the Asterisk Management Interface (AMI). The drawback to John's script is that it hasn't seen an update since he posted the code last March. I did like the baseline code though, so I've made a few changes.
The major revisions are in the output.php file. There seemed to be a lot of code to perform just a few functions. I've heavily edited that so that it now recognizes local connections and miscellaneous SIP connections that didn't meet the original filter constraints.
John's original code only allowed for kicking users. I've added mute/unmute controls. Currently, it's been demonstrated to handle local internal connections (.call connections for MOH), SIP calls from the local network, and IAX2 calls via IPKall and FWD (Yeah, I call Washington State to connect to my own machine in Virginia Beach. What the heck, it doesn't cost extra...).
The new code is here. I plan on adding color coding for muted/unmuted callers and to experiment with much more of the AMI features.
For giggles, here's a screenshot. That's my son dialed in via a SIP hardware phone, me dialed in via SkypeOut (via IPKall and FWD), while .call scripts pull in a Liquidsoap-generated stream from Icecast and push the resulting conference stream back to the same Icecast server. 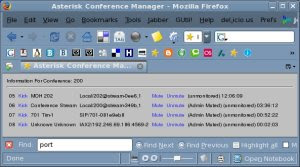